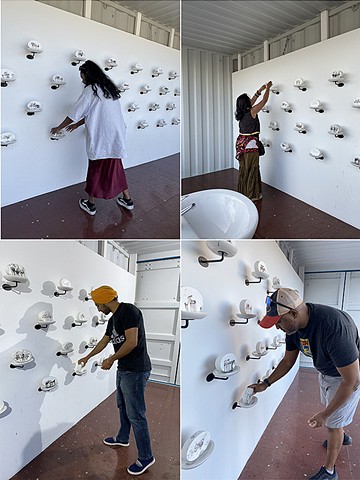 Of the many participants who washed their hands of the slurs, one in particular, stands out: a woman in her mid-20s stood watching with her friends, as participants stepped onto the shipping container, carefully reviewed the various slurs, chose a soap bar, approached the sink and washed for about half a minute, then returned the soap to its dish and stepped down from the container. The young woman quietly asked me if she could go next. | said of course, and told her to take her time in considering which slur was most meaningful to her. She stepped up, scanned the various slurs, and selected the word Retard. She then moved to the sink and began washing away the slur. As always, as soon as water contacted the soap bar, the black ink was activated — looking very much like mascara running down a weeping face. Half a minute turned into a minute, after which the young woman began scrubbing the soap as if trying to remove a stain from a garment. She began to cry, then to sob, as she rubbed and rubbed the slur, trying to eradicate the word from the soap bar. Her flowing tears merged with the soap suds and inky water draining into the sink. About four minutes after scouring the soap, she returned it to the dish, stepped down from the container, walked directly to me, gave me a warm embrace and said, “Thank you so much”. She turned to her friends and hugged each one of them, then they all walked off to other events at the Arcade. All of those watching, myself included, were deeply moved by this young woman’s compelling four-minute public action of washing disdainful speech from her own memory and, in some small way, from our collective consciousness.