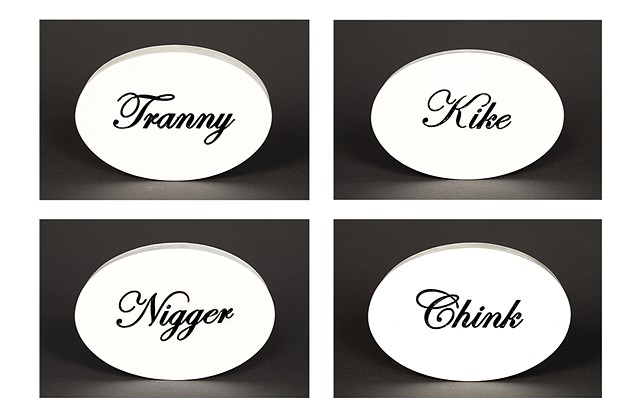 I’m cognizant that some slurs may no longer be exclusively used in a derogatory manner. For example, the ‘N-word’ has been co-opted by young African Americans to address each other, normalizing its egregious meaning and history and subverting its use as a racist insult. Each slur in the context of the concept and fabrication of the artwork is looked at as “hate speech” and does not address or ignore other forms of amicable salutations. Randall Kennedy a Harvard professor, says, in his illuminating book entitled, Nigger: The Strange Career of a Troublesome Word, (2002, Pantheon), “There is nothing necessarily wrong with a white person saying ‘nigger,’ just as there is nothing necessarily wrong with a black person saying it. What should matter is the context in which the word is spoken— the speaker’s aims, effects, alternatives. To condemn whites who use the N-word without regard to context is simply to make a fetish of nigger”.* I defer to Professor’s Kennedy’s insight as a white person referencing the N-word in an educational or art related venue, which he seems to condone in this context. I include the N-word, as a racial slur that a person of color, minority or “other” may have once experienced. By conceptually washing away this and the other epithets, using the medium of soap rather than permanently carving the slurs in wood or marble, each word is rendered impermanent and ultimately disappears.