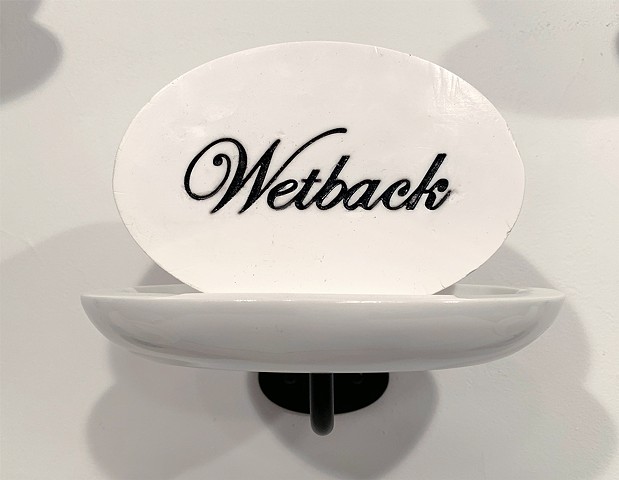 Initially the Dictionary of Slang and Wikipedia are among the sources of the words and meanings selected for the piece. In addition, each of the one hundred racial slurs embossed in the oval soaps have been said to an individual who describes how they felt when the slur was verbally hurled at them described in the artists’ book.As viewers walk through the installation they can refer to the artists’ book, which lists each racial epithet, it’s etymology, country of origin, meaning and the year it may first have been used.

In the decades since its conception, the lexicon of derogatory language and its prevalence in spoken word and print has only grown more pervasive through the immediacy of electronic and digital media. Thus, the conception remains, unfortunately, relevant, and the installation itself has grown with the addition of the latest slang and hate speech which continues in viral fashion to infect public discourse. Indeed, in the process of actualizing this installation twenty-seven years after its conception, I note sadly the similarity in form between the dishes and the dinghies or life rafts that carry the hordes of refugees fleeing the sectarian violence and hatreds raging still today.

In the Trump era the question of “otherness” is unfortunately at its pinnacle or lowest point. What is it like to live the life of an “other” person? To be the object of an ethnic, racial epithet, religious or sexist slur? To be objectified to the point of dehumanization? What would it take to cleanse such hatreds from the collective consciousness? In the sustained metaphor of this installation, to take one of the oversized soap bars and wash ourselves with it, rather than simply cleansing, it drenches us in the besmirching term. Yet, finally, the hateful language disappears as the bar of soap itself dissolves in a kind of universal moral purification.