The exaggerated sine wave of Crash is modeled after the devastating Stock Market Crash of 1929. Using the historical graph from that time period, Crash maps the rise and fall of imagery that mirrors the rise and fall of ‘Black Tuesday’. The sourcebook for the striations of colorful slices is from three identical copies of the Magic Eye III: Vision: A New Dimension in Art, published in 1994 by Andrews and McMeel, Kansas City, MO.

I used this specific book because it invites the reader to mentally and optically participate. The viewer stares into these seemingly abstract fields of color and an engaging 3D image materializes in the mind. The numerous hidden images appear as if they’re arising from the pages of the book. This does not occur in Crash as I’ve eliminated the coherence of the image by cutting the pages into one-inch strips. As a metaphor, even a parallel, to the Great Crash, to understand or predict the result of an investment the person relies upon experience, instinct and knowledge. A bit of magic could be thrown into the formula as well to project into the future for a favorable outcome; there’s no guarantee that the latter will occur. Just as the 3D image appears and disappears before our eyes, success (or a client’s investment) can quickly dissipate and vanish. Looking at the history of the stock market we know that it has peeks and valleys, a Bull and Bear market, but it always seems to ascend. Like a Phoenix arising from the ashes, the end or tale of Crash, is optimistic as it begins to rise again. 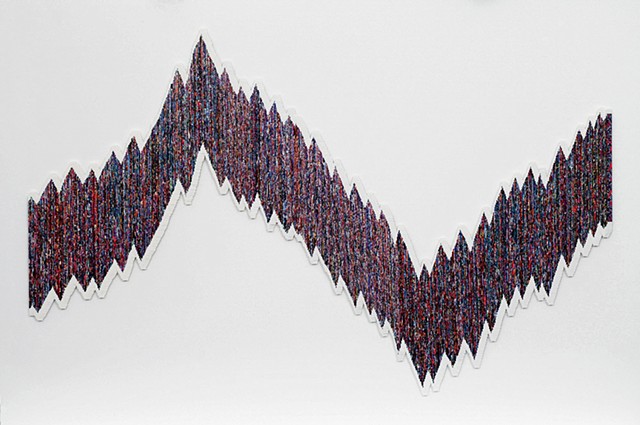